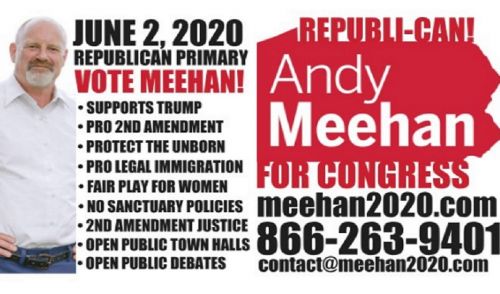 The following statement is reproduced with permission:

Andy Meehan is a Christian warrior who believes in the sanctity of life, family values, our Constitution and the right for all Americans to expect their elected representatives to fight for the freedoms that generations of our soldiers bled and died for.

On April 28th the Republican party will hold a primary election in Bucks County, PA District 1. Andy Meehan is taking on the establishment incumbent Brian Fitzpatrick.  This is a battle between a patriot and politician, David and Goliath

According to Freedom Works, a conservative organization their score card recorded the votes of 276 Republican congressmen and senators.  Brian Fitzpatrick scored lower than 272 Republicans with a score of 64%. In 2017, he voted against defunding Planned Parenthood.

In addition, he has supported far-left legislation.  He’s widely known by his constituents as a RINO and a Democrat.  Click here to view a comprehensive list of Brian Fitzpatrick’s votes, positions, and statements. http://www.meehan2020.com/fitzwatch

Andy Meehan is fighting battles on many fronts.  The Fitzpatrick campaign has $1.4 million dollars, most of which is from interest groups outside the county.  The media, for the most part, is shunning Meehan and Fitzpatrick refuses to debate him.

The following are excerpts from a statement Andy Meehan submitted to Voices for Life blog:

“There is a battle being waged for the heart and soul of the Bucks County Republican Party.  On one side are the bought and paid for Doylestown Republican establishment. The head of the Republican committee in Bucks County uses her power to intimidate and manipulate people into voting for the candidates she endorses, including Brian Fitzpatrick. The Republican party expects us to support candidates who do not represent our values. They have disdain for the voters and distance themselves from President Trump and conservatives. They pretend to be Trump supporters, but they do not walk the talk.”

“On the other side is a grassroots conservative Christian businessman who is unabashedly Pro-Trump, Pro-life, who has lived in, operated business in, and raised a family in the district since 1983. With little funding, no prior political experience, I represent what the rank and file Republicans and Trump supporters value:

Please stand with Andy Meehan to defeat Goliath on behalf of our God-given rights to life, family and freedom. Sign up to volunteer, make calls, hand out flyers and donate to his campaign.  Below is his website and informational links. Help elect Andy Meehan to defeat Brian Fitzpatrick, the establishment candidate.

ABOUT VOICES FOR LIFE: Voices for Life is an e-publication dedicated to informing and educating the public on pro-life and pro-family issues through the many postings on our blog and other social media sites. We cover issues from conception until natural death, as well as all family life issues.

1/26/2020 CONGRESSMAN BRIAN FITZPATRICK VOTES TO SUPPORT ABORTION PROVIDER PLANNED PARENTHOOD IN 33% OF ALL VOTES; MORE THAN ANY OTHER REPUBLICAN CONGRESSMAN, ACCORDING TO PLANNED PARENTHOOD ACTION FUND LIFETIME RANKINGS https://votesmart.org/interest-group/1578/rating/10353?p=2&of=rating#.Xi1IK2hKjs4