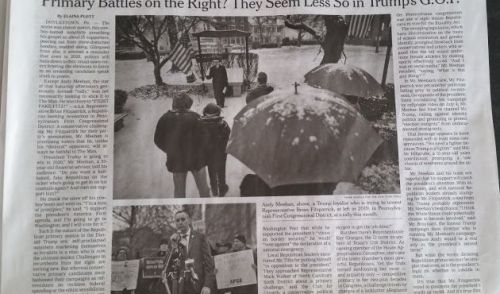 On Tuesday, January 28, the New York Times print-edition featured Andy Meehan and coverage of his Fight Fake Fitz outdoor campaign rally in the midst of a blizzard. Meehan has issued the following statement in response:

I applaud the New York Times for their recognition of the importance of the race here in Pennsylvania’s First Congressional District. The story was even-handed, but there are a few insights I’d like to add:

First, I’m not just running because I think I can beat Brian Fitzpatrick. I’m running because I believe I will be a better candidate in the General Election. Fitzpatrick has turned his back on both Republican principles and Republican voters. I look forward to facing Brian Fitzpatrick in a free, open and public debate where I will address his failure on the real issues that matter to the people of PA-01, no matter what their party affiliation.

Unlike Congressman Fitzpatrick, I will stand shoulder-to-shoulder to support not just President Trump, but also every other Republican on the ticket— especially Republicans running in down-ballot races. Brian Fitzpatrick twiddled his thumbs while the Bucks County Republican leadership lost nearly every local election to Democrats in 2017, 2018, and 2019 —the worst election losses in 30 years. I will make it my personal responsibility to make my district Republican again by helping Republican candidates win back all of these offices.

Second, I find it encouraging that, as reported by the New York Times, President Trump has expressed no interest in helping Brian Fitzpatrick win the upcoming Republican primary.

Brian Fitzpatrick’s record of condemning President Trump and rejecting Republican values and voters is overwhelming proof that he does not deserve re-election. Every voter in Pennsylvania’s First District deserves better.

“A Primary From the Right? Not in Trump’s G.O.P.” New York Times. https://www.nytimes.com/2020/01/28/us/politics/pennsylvania-republicans-trump.html