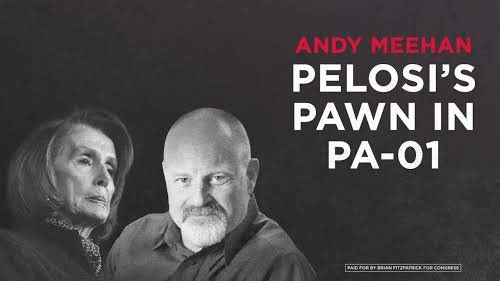 “On Thursday, January 2, 2020, Brian Fitzpatrick for Congress launched an attack ad against me to criticize me for, among other things, my enjoyment of hiking and fishing. Clearly, these are the substantive matters that Republicans in PA District 01 deeply care about.

And while my campaign is working hard to raise money here in PA-01, I’m grateful to Congressman Fitzpatrick for spending some of the million dollars he’s raised from DC special interests to produce this ad and boost my name recognition.

“However, there are some errors in this ad that I must correct.

1) Brian Fitzpatrick, not Andy Meehan, is Nancy Pelosi’s favorite Republican. According to the liberal group Americans for Democratic Action, Fitzpatrick votes with Nancy Pelosi more than any other Republican in Congress. https://adaction.org/wp-content/uploads/2019/10/2018.pdf

“Brian Fitzpatrick is scared of my grassroots, conservative campaign because I’m speaking the truth about his support for taking away gun rights, for open borders and amnesty, for letting biological men invade women-only spaces and sports, and for raising taxes. He accuses me of being a disloyal Republican, but the only reason I’m in this race is because of Brian Fitzpatrick’s disloyalty to Republican values, voters, and our President.  Fitzpatrick launched this attack on the same day he refused an invitation from the Lower Makefield/Yardley Republican Committee because I was also invited.

“Brian: It’s time to stop hiding behind your campaign staff and attack ads and have a real debate.”