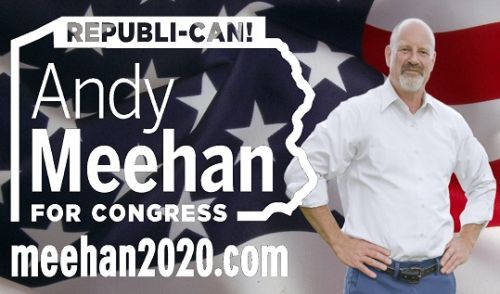 Andy Meehan was born and raised in the Fox Chase section of Philadelphia, is a graduate of LaSalle High School, earned a BS in Marketing and Business from Penn State, and an MBA from LaSalle University, which he put to work running his own independent financial advisory and insurance practice since 1998. Prior to announcing his candidacy for the US House of Representatives July 4th, 2019, Andy was content being a businessman, husband and father. Andy’s only formal political activity had been working on behalf of the Trump campaign in 2016 and in the 2018 Republican primary.

After watching Congressman Brian Fitzpatrick fail his constituents over and over again by voting like a Pelosi Democrat and opposing President Trump, even going so far to vote with Nancy Pelosi to label Trump a “racist,” Andy felt it was imperative that an actual Republican challenge Fitzpatrick for his house seat. A passionate and energetic advocate for classic conservative American values and the Trump presidency, Andy will be on the ballot for the Republican primary April 28th, 2020 in Pennsylvania’s First Congressional District.

Andy and his wife of 29 years, Lisa, live with their two sons in Holland, Pa. Prior to moving to Holland in 2007, Andy and his family lived in Levittown for 18 years. An active participant in the Bucks County soccer community, as a player, volunteer youth coach and now a referee, Andy’s love for the game that he has played since the age of 5, endures. A talented and high energy musical performer, Andy leads the Bucks County based Well Strung Band as lead singer and harmonica player. In his spare time Andy enjoys skiing and snowboarding, fishing and scuba diving.